Fractionauts is an educational game for the XO PC, with the primary purpose of teaching and testing children on the properties of fractions and the various operations which may be performed with them. 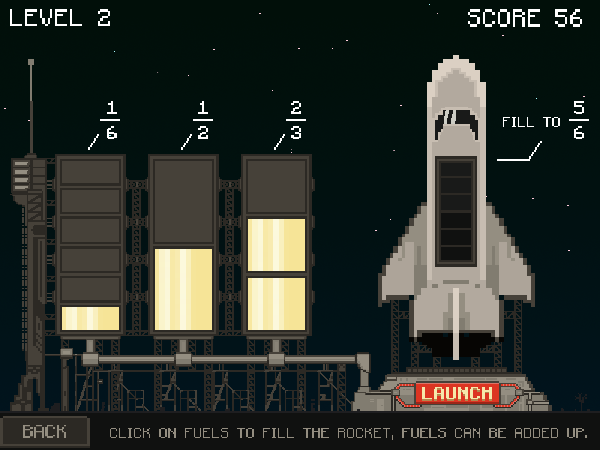 Fractionauts is designed to teach these fraction operations on a fourth grade level of understanding as defined by the New York State Math curriculum. Players are required to solve mathematical problems, where they are given a goal amount in fraction form and must combine other fractional amounts to achieve this goal amount (ex. combine 1/4 and 1/2 to achieve the goal amount of 3/4). When a question is answered correctly, the user moves on to a new question, where each successive question should increase in difficulty.

Fractionauts, as loosely suggested by its name, is a game about exploring space and solving mathematical problems involving fraction operations. The user takes on the role of a space explorer, and in order to move through space they must fill their rocket ship with the correct amount of fuel. Each level contains a problem, presented to the player through a goal amount of fuel they are trying to achieve. In addition to this problem, the player is supplied a collection of tanks which are already partially filled with fuel. The player is required to mix these partially filled tanks into the main fuel tank, with the goal being to fill the fuel tank to the goal amount. If the tank is filled too much or too little, the answer is incorrect.